Skip to content
On this page
The Hidden Control Flow — Some Insights on an Async Cancellation Problem in Rust
This article discusses a long-standing issue on async cancellation we encountered when building GreptimeDB, providing an interim solution to this issue together with our thoughts and insights. Open for discussions! 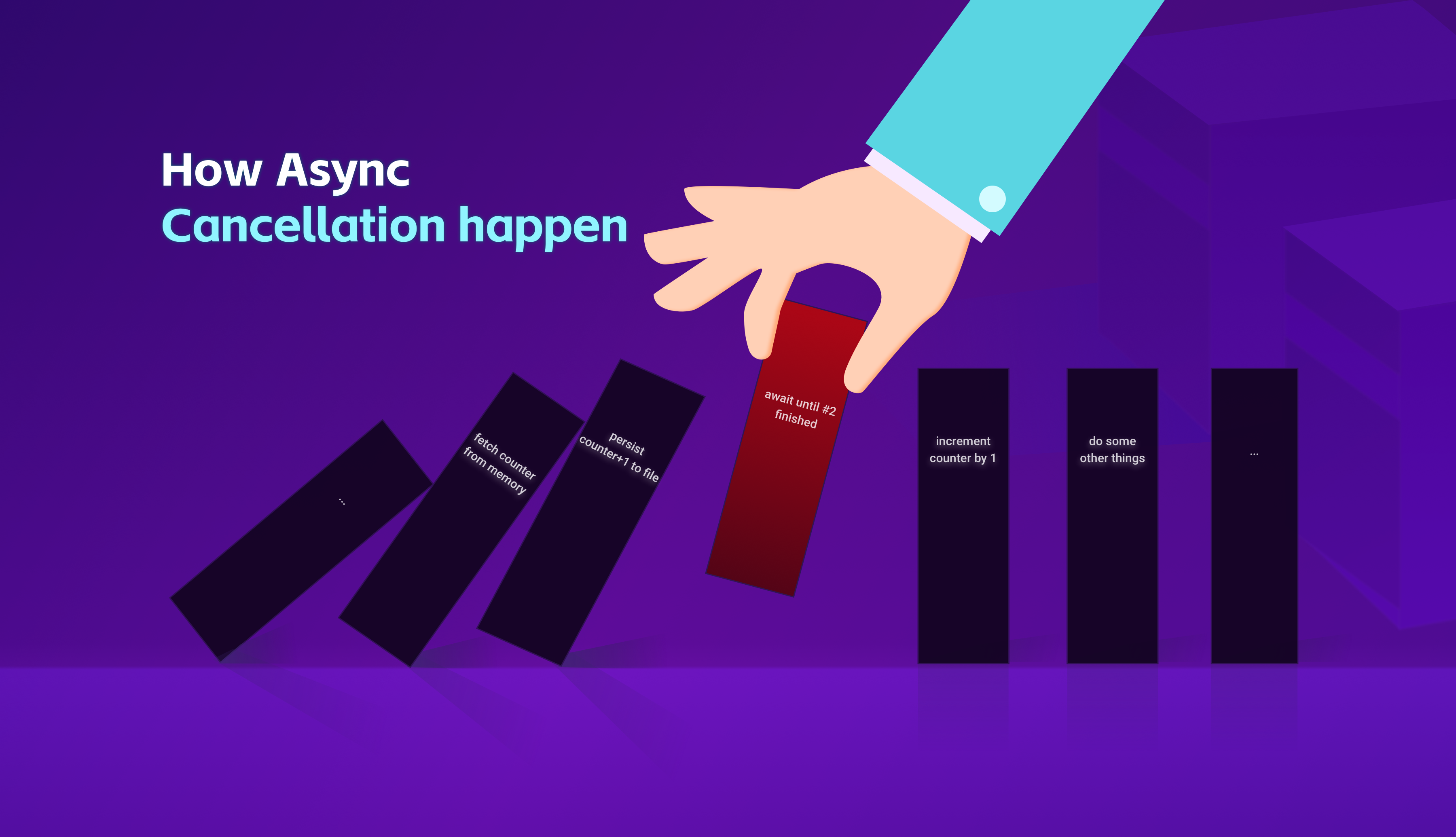 "Asynchronous programming is a technique that enables your program to start a potentially long running task and still be able to be responsive to other events while that task runs, rather than having to wait until that task has completed." [1]

This post discusses an "unusual" problem our team of engineers encountered with async programming when building our time series database, GreptimeDB, in Rust. We observed metadata corruption in a long-run test: a series number is duplicated but it should be increased monotonically. The update logic is very straightforward, firstly, load values from an in-memory atomic counter, then persist the new series number through an async I/O function to file, and lastly, update the in-memory counter. The entire procedure is serialized (file is a mutable reference):

Because some functions may be terminated early, fetch_add is not used here, instead, load is used. It is unnecessary to update the in-memory counter when the previous task fails halfway during execution; for example, persist_number() failure from function calls will result in an early return (by ? here) to propagate errors. We know beforehand that some function calls result in similar failures; thus, we pay extra care when coding.

If you have figured out what's causing this in the background, you may want to skip this section. Otherwise, let me try to explain with .await by using some pseudocodes as examples to show how it interacts with "runtime".

First is poll_future , which comes from the Future 's poll function, as every async fn we write will be desugared to an anonymous Future implementation.

Among many features, the most basic one for async runtime is to poll tasks, which means to keep running unfinished tasks until they are finished (but considering the points later in this article, "until" might not be very accurate). In GreptimeDB, we use tokio as our runtime. For simplicity, I'll use the following pseudocode to demonstrate the basic features of runtime.

Above are very simple and basic illustrations of what future and runtime do. Combining these two functions, you will find that in some aspects, it just acts as a loop (again, I've omitted lots of technical details to focus on the matter at hand, the real-world use cases of runtime are much more complex). The bottom line is that each .await implies one or more function calls (call to poll() or poll_future() ). They are what the "hidden control flow" in the title refers to and the places where "cancellation" happens.

You can take a few minutes to figure out the result, and if it is consistent with the following, I believe you already know what the problem is.

The code after print(2).await is all cancelled due to timeout.

Though it is not difficult to understand the underlying principle, identifying the problem was not as simple (at least for me in this case). I stared at these lines for a long time after I narrowed the scope down to the first code snippet. I knew the problem was definitely in the .await, but I didn't know whether too many successful async calls have clouded my thinking or I didn't think of connecting these two points, I was stuck at this issue for quite some time and couldn't move forward.

So far, I have presented the problem and my thought processes, which leads to our next discussions on "cancellation", since it is affected by the behaviors of runtime. Although many runtime in Rust have similar behaviors, "cancellation" is not a required feature, and for example, my toy runtime does not support "cancellation". I use tokio here as an example because it is where the issues happen, and other runtime may have similar issues.

In tokio, one can use JoinHandle::abort() to cancel a task. Tasks have a "cancel marker bit" which tracks whether it's cancelled or not. And if the runtime finds a task is cancelled, it will kill that task (code from here):

The logic behind async cancellation is not hard to follow: runtime gives up polling your tasks even it's not yet finished, like what ? does but sometimes it's even more difficult because we can't catch this "cancellation" like Err. But does it mean that we need to worry about every single .await being cancelled at any time? It would be very irritating. We will take updating of the metadata as an example in this post. If we use "cancellation", then we need to check if the file is consistent with the memory state first, otherwise we need to rollback the persisted changes, etc. The bad news is that in some cases, the answer is "yes" because runtime can do almost anything to your future, but the good news is that most of them are well-behaved.

So currently, do we have any means to force the runtime not to cancel our tasks? In tokio, we can actually "detach" a task to the background by dropping the JoinHandle. As a detached task, there's no foreground handle to cancel the task, and disabling others to wrap a timeout or select over it, thus making it un-cancellable.

The problem we highlighted in the very beginning is solved in this way.

A JoinHandle detaches the associated task when it is dropped, which means that there is no longer any handle to the task, and no way to join on it.

Though the functionality is already out there, I'm wondering if it's better to have an explicit "detach" method like glommio, or even a detach method in the runtime like spawn, which doesn't return the JoinHandle.

It's comforting to know that a runtime won't cancel a task for no reason, as in most cases it is required by the users. However, sometimes users won't notice this, like those "unselect branches" in select, or the logic in tonic's request handler. So if we are sure that a task cannot be cancelled, explicit detach may prevent some of the issues from happening.

Now that everything is clear, let's fix this bug!

First, we need to figure out why the future is cancelled. By looking at the function call graph, we can easily find that the entire procedure is executed in place in tonic's request licensing runtime.

Since it's common for an internet request timeout, the future may be cancelled because of this. The solution is also simple: detaching the server processing logic into another runtime to prevent it from being cancelled with the request. Only a few lines need to be modified here:

This workaround does not fundamentally address the bug caused by async cancellation. By using runtime to avoid tasks being cancelled early due to timeouts—our asynchronous logic will still be executed nevertheless in the end. Such processing will accentuate other problems, for instance, we cannot cancel tasks that are no longer required or consume a lot of resources in advance, which will lead to a waste of system resources. These are the areas where we look to improve in the future.

For our next step, we will continue to explore this aspect, to improve the use of the async cancellation experience.

This section presents and discusses our expected results of a runtime.

Instead of seeing the runtime cancel my tasks without restrictions, it will be better to check if the task can be cancelled using the type system of Rust. For example, use a marker trait in "CancelSafe" mentioned here in tokio:

To determine whether your own methods are cancellation safe, look for the location of uses of .await . This is because when an asynchronous method is cancelled, that always happens at an .await. If your function behaves correctly even if it is restarted while waiting at an .await, then it is cancellation safe.

Using a marker trait similar to "CancelSafe" gives programmers control of telling runtime when it's time to cancel tasks, and this is also one of the key considerations of async programming. In the doc above, tokio provides a long list of which actions are safe and which are not. Same as this marker trait here UnwindSafe, they both describe cases when the outcome of the control flow is unexpected and causes unknown bugs.

Another approach is to make the tasks cancelled voluntarily. Like the cooperative cancellation in Kotlin which has an isActive method for a task to check if it's cancelled.

However, this method acts only as a tester and it should be the task itself that determines whether or not to be cancelled. Below shows an example from Kotlin's document, the "cooperative cancellation" happens in line 5. In this way, it brings the "hidden control flow" to the table and makes it more natural to handle the cancellation just like Option or Result.

In my opinion, the above expectation is not hard to achieve. Though it looks a bit different, Tokio already has the Cancelled bit and CancellationToken. Above all, we need runtime to give the cancellation right back to our tasks.

Greptime is founded in April 2022 with two main offerings: GreptimeDB and Greptime Cloud. Greptime DB is an open-source, cloud-native time series database with powerful analytical features; Greptime Cloud is a SaaS solution built on GreptimeDB. We are passionate about helping users find real-time values from their time series data with our tools.

If you have any insights or suggestions, please contact [email protected] or join our Slack channel for more information and discussion.